Free shipping on all orders over $99 & Flexible Returns Policy 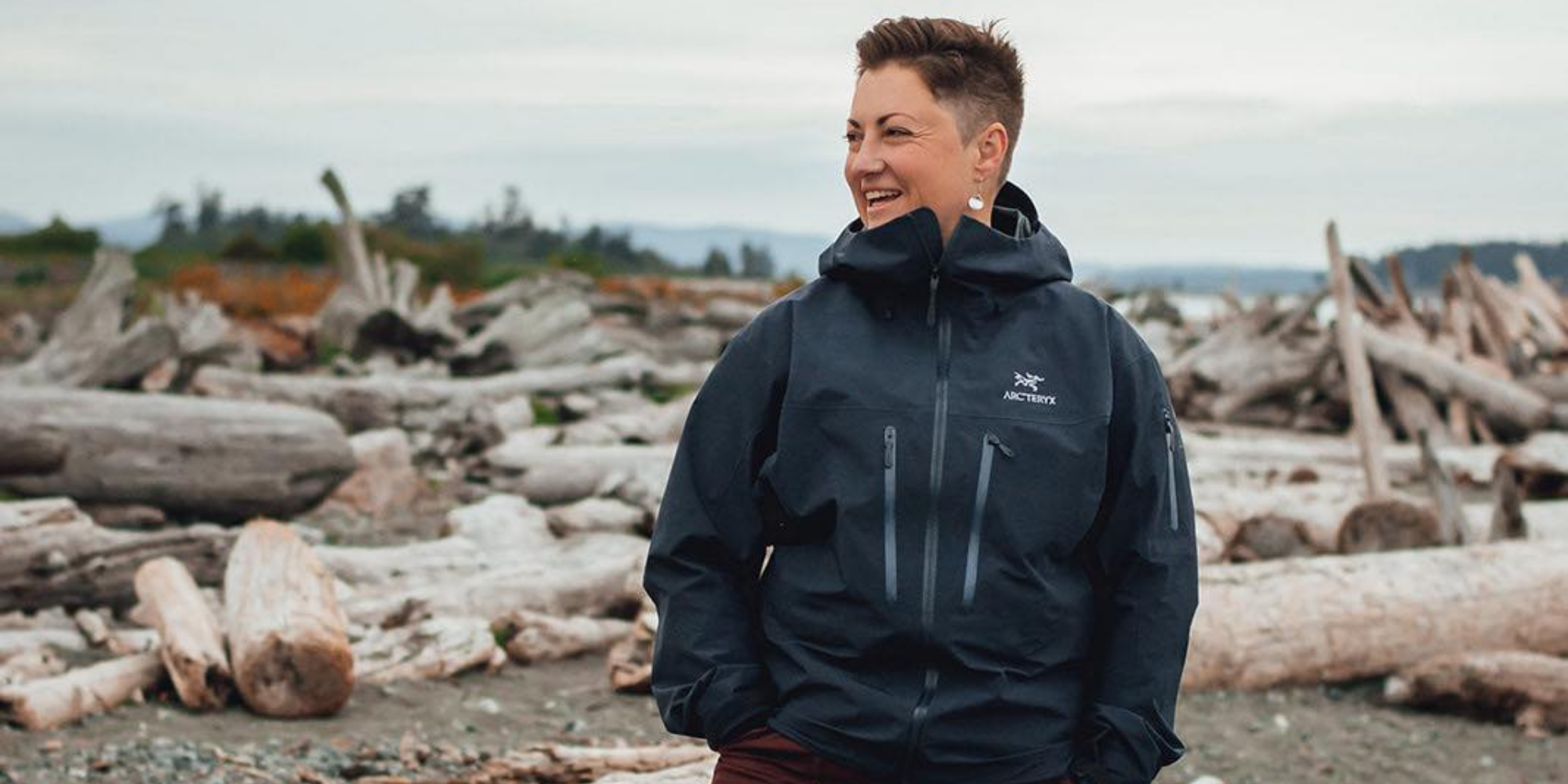 A real story about real, badass women in snowsports

Kerry Vandendriessche was just 12 when her mother pulled her out of a crevasse. Growing up in the Canadian Rockies as the daughter of a career ski patroller and instructor meant that family vacations and weekends looked a little different from what her city peers experienced. “While other kids went to Disneyland, we went to Alaska,” she said.

Winter sports were serious business. The family’s kitchen window looked out over the mountains, so when it was snowing, their mother would take Vandendriessche and her siblings to the ski hill instead of to school. She became an accomplished skier, climber, and all-around mountain woman, before pursuing competitive speed skating as a teenager.

As an athlete with Olympic ambitions, Vandendriessche had the support and coaching that you would expect: intensive training sessions, and the top health and nutritional advice to optimize performance, including a strict keto diet, insisted on by her coach.

It was when the competition stopped that the problems began. In her early 20s, Vandendriessche realized that she was unlikely to reach the Olympics, and decided to step away from speed skating to pursue other interests.

“I was 135lb at my racing weight, and 18% body fat,” she says, at the very low end of the healthy range recommended by medical professionals. “By the time I had my second child at 37 years old, I was 280lb, with over 40% body fat and blood pressure in the 160s. They told me I was going to have a stroke if nothing changed.”

After years of searching for answers and begging doctors to take her weight gain seriously, Vandendriessche was finally diagnosed with Polycystic Ovarian Syndrome, an often painful disease that can affect fertility and has a significant impact on the endocrine system. This had been the cause of Vandendriessche’s dramatic change in body shape, despite remaining very active after leaving competitive sports.

She says, “For me, there’s a lot of regrets there. Every time I threw up a flare to ask for help, there was nobody there. Obesity is not the disease, it’s a symptom of the disease. It’s the biggest symptom to tell you there’s something the matter, that you need to go and look for what the underlying cause is.”

Things came to a head when she realized that her weight was endangering her life. With a husband who worked in a remote area up north and a non-verbal child with Down’s Syndrome, Vandendriessche knew she needed to regain her health, no matter how hard it was. “If I had had a heart attack or a stroke at that time, there was no one else. My children would have died alongside me.”

The journey would prove far harder than expected. She endured insults at a top-end yoga wear store, was unable to find supportive athletic shoes, and was told that she couldn’t purchase a carbon-fiber mountain bike because she would break the frame (as a qualified bike mechanic, Vandendriessche can confidently say, “that’s bullshit.”).

“I actually had to lose weight in order to exercise,” she says.

She once again adopted the strict keto diet from her skating days and was able to begin shedding weight, and as she did so, she looked forward to being able to ski again, resuming not only an athletic passion but an important part of her life that had enabled her to socialize with friends and family in the past.

However, getting back into the sport she had once excelled at would prove to be an arduous journey. She had sized out of women’s ranges and had to settle for a men’s jacket that wasn’t cut for the female shape, leaving her exposed to the cold from the waist down. She was unable to find insulated ski pants to fit, and so could only ski on the warmest of days. Boots were also a problem – they aren’t made for larger sizes, and Vandendriessche had the added challenge of over-developed calf muscles from speed skating. She recalls the many times she would have to argue with store clerks and boot fitters, who didn’t believe someone built like her could be an expert skier.

While she felt shamed by these frequent experiences, the impact wasn’t purely emotional. “When ski clothes don’t fit properly, you can’t bend to get into the proper stance to control your speed, so it becomes a safety issue,” she says. “It doesn’t have to be that way, you can have elastic gussets in a waistband, it doesn’t have to be a low-cut waist. Everything I tried was just extremely poorly designed.”

None of this is news to Mon Balon, owner of the plus-size ski brand, Plus Snow. A veteran of the Australian ski industry, Mon has recently launched her brand in North America and has been overwhelmed by the demand for high-quality ski wear in larger sizes. “I had a little bit of product in my online store, and the plus-size stuff sold out straight away, so I ordered more, and that range sold out even before it hit the store,” she says, when asked how she came to specialize in plus-size gear. “The thing that really hit me was that desire to go skiing, and that need that was not being fulfilled. I got so much customer love just because I could help them get back out there.”

Mon had developed strong relationships with her existing customers, whose stories informed the Plus Snow approach to fit. Women customers echoed Vandendriessche’s story of purchasing ill-fitting menswear or being unable to find outerwear that was technical enough to keep them properly warm and dry.
“There’s a massive misconception that plus-size people are not active enough. People’s lives and bodies change all the time, but when they want to start skiing again, they feel inadequate and unwelcome – it comes as shock,” says Mon.

She wants the outdoor industry to stop assuming that plus-size people don’t want to ski. “People can be healthy at every size. You can be on the higher end of the size grid, and still be just as strong, fit, and active as every other person out there. It is possible to be a plus-size athlete and we need to recognize that. Brands don’t realize that a plus-size woman climbing a mountain or skiing is much more inspiring to most people than a skinny athlete. It's a better representation of 'normal people”

After seeing the initial demand, Plus Snow now offers ski wear up to size 30 for women and 10XL for men. “In the early days it was tough – I’m a mum as well as a business owner, and I would be sitting in the car on calls, trying to shush my kids in the back seat. But because of my history in the industry, my suppliers were willing to listen.,” she says.

“Brands don’t realize that a plus-size woman climbing a mountain or skiing is much more inspiring to most people than a skinny athlete.”

With the average American woman now wearing a size 16 to 18, a number of brands have taken note of the growing demand for a shift in traditional sizing for outdoor wear. Columbia has long offered an extended sizing range, and Obermeyer now produces ski wear up to size 22. However, the push for change is strongest from small, independent brands, and increasingly vocal influencers who have provided long-sought-after visibility to bigger athletes and outdoor enthusiasts.

Balon is pleased to see progress but notes that there is a long way to go, particularly in moving away from the “pink it and shrink it” design philosophy that for many years stood in the way of women-specific design in outdoor wear. “A lot of women go to men’s stuff, but it’s not designed to fit women in the waist and hips, so the fit is all wrong. Stuff falls down around the waist, the leg is too wide, it’s not tapered.” By taking measurements from real customers, Balon says she now has a good handle on what plus-size customers need. “It’s not about size, it’s about shape, and you need to fit for that,” she says.

Snowsports coach Isla Marsh agrees. As she recently noted, “The two key problems are fit being true to size, and women’s snowsports clothing design not allowing for true sport performance. Collectively as women, shopping for outerwear is a stressful and demoralising experience. Women in snowsports use their legs and bums to perform on their skis and snowboards, so we have muscles. Our thighs are not the thighs of models, but the thighs of athletes.”

While recognizing that not all brands can fit everyone, for Balon, it’s a question of equity. She believes that all people should have access to the benefits of nature and the joy of being in the snow, without having to compromise being warm and dry, or feeling embarrassed about the look or quality of their gear. “You can go to Walmart and buy a shit quality plus size jacket, but that’s not what I’m about. Plus-size people who want to outdoors need the same high quality, technical gear as you find in smaller sizes.”

And that is what Vandendriessche has been searching for. “I’m a proper outdoorswoman,” she says. “I know how to tie a bowline, I know how to read an altimeter. Fat people should be allowed to have functional pockets and good zippers.”

Being unable to ski because of her weight left a lasting impact on Vandendriessche. “Because of my obesity, I didn’t get to ski with my mom before she died. That’s what the weight stole from me.”

While managing her illness will be a lifelong effort, she is nevertheless optimistic about the future.

“I will never be skinny. But I like the body I’m in right now and the things it’s capable of doing. So, if there’s a company out there that supports me in doing those things, I’m going to keep buying their stuff.”

This article was originally published in shorter form in Sisu Magazine. Thank you to the author, Ali Wines, and to the inspiring Kerry Vandendriessche for sharing her story.